BEAN Tonight, BEAN on YouTube, BEAN on the Radio

BEAN is here and in full swing!  TONIGHT at midnight is the next performance!

Hear me talk about BEAN just before the awesome opening night party of the Hollywood Fringe Festival!

Click below to hear my LIVE interview on KPFK 90.7 FM.  Julio Martinez of Arts In Review asks me about BEAN and my experience at the Hollywood Fringe!

ARTS IN REVIEW FRIDAY JUNE 17th at 2pm with BEAN

Come on out and BEAN it up with me.  Only three shows left!
Posted by Michelle Lema on June 18, 2011

BEAN opens today and I couldn't be more excited.  If I blogged my thoughts they would sound like this:

So I will keep this post short and sweet.  I woke up this morning realizing, holy crap I'm doing my own solo show today.  When did this happen?  It's been a trying, wonderful, painful, exhilarating process over the past couple of months and it's just the very beginning!  I can't wait to get out there and share a story and hopefully not fall off or through the stage at any point.

A Conversation Between Me and Kevin Part 102

Kevin:
every time I see your ad on the fringe site I feel bad because I just cost you an impression. and because no amount of advertising will ever make me see your show.

Kevin:
i kind of want to act in a play
a good play
but i dont want to become an actor
can you get me into a play?
a good play?
as an actor?

Kevin:
just make it happen and call me when the audition is gonna happen
i still have to get Milford onstage
make that happen also

me:
hm
only if you cast me as the lead
i would love to see you act again

Kevin:
i think i could be better


me:
i think so too
you are more worldly

Kevin:
also, as a genius director, i can act better than a shitty actor


Kevin:
im going to the bathroom


me:
best thing
you've ever told me
BFF
i will carry that with me always
good bye kevy
i shall find a play for you


TODAY
Although scheming 8 months ago together, I am not in Kevin's show and Kevin is not acting in a play, but we are both presenting our OWN work at the Hollywood Fringe Festival and I am very proud to be his friend and colleage.  Go see the show Kevin wrote and directed - it is The Milford Project and it is great (CLICK HERE FOR MILFORD).  And come see BEAN (CLICK HERE FOR BEAN), where you won't see Kevin at all.  Ever.
Posted by Michelle Lema on June 08, 2011

To this day, my favorite singing group is the Temptations.  My Girl?  Love it.  Ain’t Too Proud to Beg?  Sing it in the shower every morning.  Papa Was A Rolling Stone? Get outta town.  I had all of the Temptations biographies memorized as a small child and even made a list in a notebook documenting their original members, when members were replaced, who got married, divorced, how they died, everything.  I added to the list a chronological order of when their hit songs came out.  They were ever changing and spanned decades.  I could list the names of the Temptations circa My Girl at any given moment.  Paul Williams, Otis Williams, David Ruffin, Eddie Kendricks, and Melvin Franklin (nickname Blue).  In fact, I did so all the time.  Out loud.  I would randomly shout it at people when I wanted to impress them, but instead they would be confused and shuffle away.  If anyone found that notebook they would think it was creepy as shit.  Just like my Titanic and JTT scrapbooks.  But I call it inspiration.  The Temptations inspired me and still do.  And now I dishonor them by singing their songs at karaoke.  But I try my best to do them proud.
Posted by Michelle Lema on June 08, 2011

Next door to my work is a gym.  And at that gym they train people with tires.  That's right.  Tires.  What does that mean you ask?  Well I'll tell you.  Almost every day that I leave work I have to dodge the same small child wearing a harness, that is attached to a rope, that is in turn attached to a tire.  The child is running with all of his might with the tire trailing behind him.  He is blocking two lanes of traffic and I see almost every person who drives around him go "What the???"  His coach is watching and cheering him on.  His coach is proud.  The child is SERIOUS about his tire work.  It is the weirdest thing I have ever seen.  Actually, that's not true.  But it's definitely in the top 20.  I am not a personal trainer in the least, so far be it from me to judge or to know the latest and greatest in tire training for kids who want to get in shape.  But this whole thing is really ridiculous.  Every day the tire gets bigger.  The first time I saw him tire training it was with a regular car tire.  Today he was pulling a tractor tire and I was REALLY impressed.  I hope he soon graduates to dragging a whole tractor.  The kid is determined, and I bet he could do it.  Run like wind, tire kid.
Posted by Michelle Lema on June 06, 2011

My Circle of Trust 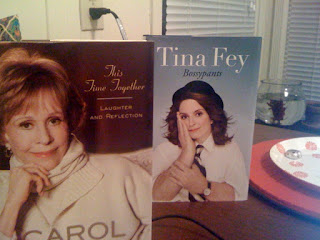 I thought it would be funny if I put up pictures of people who inspire me while I work on BEAN, for encouragement.  In this photo I have surrounded myself with Carol Burnett, Tina Fey, and of course my fish, Captain Barbosa.  At first I thought it would be fun to run ideas by them and say things like, what do you think Carol? And then laugh at myself.  Then after hours of working and becoming slightly delirious, I started to talk to the three of them as if they were actually there until I noticed Captain Barbosa staring at me.  Judging me.  I asked him if I was being ridiculous and he just gave me a dead pan look as he is wont to do, being a fish.  I started to read a part of my show to him and he turned around and then pooped.   So that part of the show needed some work.  Although Carol and Tina were always smiling and encouraging me to keep working, I guess I needed the Captain to dish out some tough love and bring me back to reality.  Thanks, Captain, you keep me honest.  And thanks Carol and Tina, because you really are brilliant and inspiring, and would probably be creeped out by this.
Posted by Michelle Lema on June 03, 2011

As BEAN draws near I have neglected my daily countdown on my poor little blog in pursuit of getting everything all ready for the crazy that will be the Fringe.  I couldn't be more excited.  My blog couldn't feel less loved though and on top of that I am using one post to get me back on track for the countdown because I'm about 6 days behind at this point and that will just not do!  I know, blog, it's a slap in the face.  But it doesn't meant that I love you less, blog.  In fact, I've personified you and that means I have developed an unhealthy imaginary friend complex for you and am crazy.  Perfect for Fringe season!

So I thought I'd take the time, since I've shamed you, blog, to talk about my top five moments of shame.

NUMBER FIVE
Getting hit in the face with a baseball as a kid and crying.  There's no crying in baseball.  Even for five year olds.  Mark my words I never cried again, even years later when I had the stitches of the baseball imprinted on my ASS when I got hit by a pitch.


NUMBER FOUR
Getting hit in the face with a firework (yes, a FIREWORK) in Paris on Bastille day in a moment of heightened glory and excitement.  The ultimate buzz kill. SEE Firework to the Head Blog Post

NUMBER THREE
Getting attacked by gypsy children in a cave in Spain.  They asked if they could draw butterflies on my arm and they DID NOT DRAW BUTTERFLIES.


NUMBER TWO
Going to the drama prom in college in a Dorothy costume and getting back to my dorm only to remember I didn't have my key, falling asleep on the benches outside, and waking up in full Dorothy garb in front of a crowd of people.

NUMBER ONE
Thinking that the way to pronounce blanket was blank-let until I was 17 years old.   One day someone told me: that's not how you say that.  Thanks, dad!


So there you go, blog.  I hope you feel better.

Today I spent 10 minutes trying to open a bottle of cranberry juice.  I started to open it thinking it would be easy and the force it took to turn the lid made the bottle fall on the ground - luckily it was plastic.  Then I picked it up and got a tighter grip and tried a little more force.  Nothing.  Then I tried a tight grip and bracing myself in full yoga pose to provide inertia.  NOPE.  Then I realized my hand was BLEEDING.  Great.  Determined that my blood shed would not be in vain, I then I used a paper towel to cover my hand and gripped the lid with all of my might and tried to turn the cap so hard that my hand flew off and hit the wall next to me REALLY hard.  Then I got mad and I THREW the bottle across the room, startling my poor fish, Captain Barbosa.  Then I calmed down and glared at the bottle for a moment.  Then I walked over, picked it up and tried one last time to turn the lid and DINK, it opened up like it was made of clouds.  So, CRANBERRY JUICE MAKERS this message is for you:  cranberry juice is NOT the Temple of Doom.  Don't test my intellect and inner strength when I'm trying to get some juice. The bottle and I had to come to terms with each other before I was allowed the juice within and it ruined my juice drinking experience.  Please stop this madness or hire Harrison Ford himself to run into my apartment and open the bottle with a whip because that would at least be entertaining.  Thank you.
Posted by Michelle Lema on June 01, 2011