BEAN DOWN UNDER: The Socks

One day, I am walking along the streets of Fremantle and I run into a strange sight.  I am right by the famous hospital (why it is famous I do not know, because it looks like an apartment complex you would see in North Hollywood - also, it's like a ghost town.  No one is around.  Maybe it's not really a hospital but an alien breeding ground like on Doctor Who, my favorite television show of all time.  Maybe if I stand here all day at some point I will see the Doctor hop out of a blue telephone box and save the day and then I can become his companion and travel through space and time forever.  I will fall in love with him, but he won't be able to return that love because of his tormented past.  But I digress.)  Although odd, the empty hospital is not the strange sight that causes me to stop in my tracks.  Instead, the rusted chain link fence in front of the hospital catches my attention.  I stare at it for a long time, taking it in.  For as far as you can see down the road, this chain link fence is adorned with socks.  As in the socks that you put on your feet.  And the oddest thing of all is that there is just ONE of each kind of sock, no matching pairs can be seen. 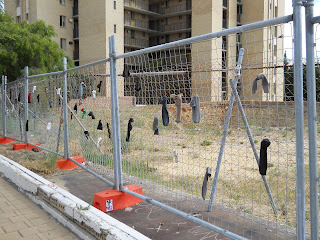 Scattered in every section of the fence, up high and down low, and in no particular order, there are knee socks and ankle socks and even water socks (aren't those expensive?), patterned ones, one with holes in it, one that looks like a hand puppet version of a snake, one that looks like it was first eaten by a rabid animal and then spat out onto the fence, and even a giant one that looks like it literally belonged to the largest man or woman known to humanity. I mean, I could fit my entire body in this sock and join a potato sack race.  Then I see a tiny tiny infant sock at the very bottom of the fence.  My god.  A tiny baby has crawled on its own and placed its tiny sock on the fence.

It is a mural of singular, lonely socks.  BUT WHY?  How did this happen?  Why did this happen?  Did one random person walk by and say, "I think I'm done with my socks, but just with ONE of them," and then proceed to take off one shoe, and one sock, and place that sock on the fence, merrily putting their bare foot back into their shoe, and then squeaking on down the street, slowly creating a blister on their sockless foot?  This sounds like my nightmare.  One, I'd be afraid of germs if I accidentally lost my balance and my bare foot landed on the sidewalk that most certainly contains alien dander from the "hospital."  That would be the end of me.  Two, one of the worst things in the world is having one sock with nothing to match it with.  Why would you bring this terrible fate upon yourself? Who was this barbarian?  And if that is the case, if this was an act begun by one person, then why would so many people follow this act blindly - an act taken by a person who clearly has no regard for socks or for his or her own dignity?

Or maybe, it WAS an act of dignity.  Maybe there is a problem of rampant sock discrimination in Australia and this was a group effort, an act of defiance, an act that said, everyone has a different sock on their foot!  Everyone should try to walk a mile in someone else's sock before they think that their socks are better than someone else's socks!

But no, none of that seems quite right.  Something else, something important is going on here.  I look at all of the socks for a long time.  And I look up at the hospital and listen to the silence around me.  And then I realize: these socks were not acts of defiance or anger.  These are the socks of all of the missing, the lost, the dead.  Each sock has a story, each sock had an owner.  And I realized why I felt so very alone.  I look at a sock and I see an old woman getting ready for a day in her garden.  And another, I see a teenager getting ready quickly and sneaking out of her window on Halloween.  I see a bunch of socks that were worn by a homeless man who piled 20 different socks on at a time, only on his left foot, to ward off demons.  I see a lucky sock that won a championship and was never washed.  I see a sock that once journeyed across the ocean, by boat.  I see a sock that has never been outside of this city and one that was just about to leave the country for the first time and never got the chance to.  And I see the giant potato sock - it was worn by a real live troll.  All of these socks have a story.
All of these socks have made a sacrifice, and have been left behind as a memory of the person who once wore them.  For those brave socks, I decide to face my fear.  Without thinking, I take off my right shoe, and my right sock.  I jump up as high as I can on the fence and stuff my little Sponge Bob sock into the wire.  I step back and look at my little sock, mounted proudly among its brothers.  Who knows when I will see my sock again.  Or where it will go without me.  But I left it there because I didn't want the other socks to be so lonely.  In return, those socks made me feel much more brave than I have in a long time.
Posted by Michelle Lema on March 22, 2012

BEAN DOWN UNDER: The Beginning! 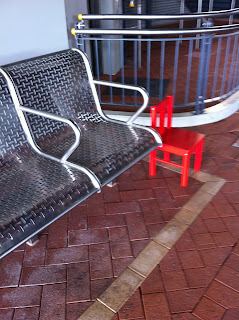 And since I was travelling alone, I got a much different experience than I ever have before.  For example, I was forced to speak to strangers, which as we all know, is something you should NEVER do.  And in turn I met people I don't think I would have ever met had I a companion to say to me, "hey, you're going the wrong way on the train."  Or "hey, don't eat that."  Or "hey, maybe not get on the ferry full of children who are trying to tip the boat over by running back and forth from either side of it." (I did.)
No, instead the strangers of the great city of Perth warned me in their own way, and they were my friends.  So I thank you guy on train who saw I was going the wrong way and bought me the correct ticket.  And I thank you security guard that didn't taze me when I walked past you, not knowing I was supposed to show said ticket to you to get out of the train station (instead he called me sweetheart and asked if I was from Canada.)  And I thank you Fringe World backstage security guy for telling me I have "lippy" (lipstick) on my teeth nightly so that I didn't smile a toothy and red smile and frighten the children in the audience.  And thank you wildlife animal expert who told me not to pet koalas near their face or they'll bite my hand and/or face off.
I'm pretty sure the people of Perth saved my life at least ten times a day.  And not once was anyone rude to me. EVER.  Well, actually there was one time when I was in Fremantle and a swarm of BEES started attacking me - I'm not joking it was like a Stephen King novel freakish amount of bees, just swarming in one place.  And I happened to be staring at the old Fremantle Prison deciding if I wanted to go in and take a tour (my fear of ghosts getting the better of me) when the bees surrounded me.  SIGN.  That's a SIGN.  So I yelled and cried at the same time, sounding like Chubacca, and ran away from the bees, shaking my arms in the air and hopping from one foot to the other (it confuses the bees, you see.)  Anyway, a man happened to see this and looked at me, and said "what is that idiot doing."  EXCUSE ME SIR.  I am being attacked by a thousand killer bees and escaping unscathed, what are YOU doing??  I wanted to glare at him but I was too busy running up the hill, away from the bees.  Then, at the bottom of the hill I heard him encounter the same set of asshole bees and he screamed like a small child.  It was at that moment I heard his accent and realized he was an American.  As I watched him run away holding his crotch (WHY, its not like they are going to dive bomb you there) I felt victory.  He was not Australian, so the people of Australia are still untarnished in my memory.
I've decided to chronicle my journey in Perth, and later in Sydney, in the ol' blog and call it BEAN DOWN UNDER as I previously named ALL of my marketing material for the show because its just so darn catchy!
Look out for more BEAN DOWN UNDER, especially for the glorious moment when I encounter the most wonderful creature in the world, Karen the Koala: 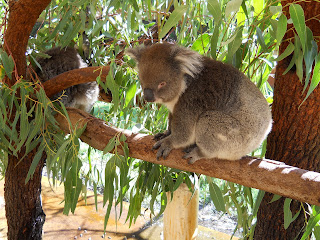 Oh Karen, you changed my life.  And also I'm pretty sure my stuffed koala Kenny (who was with me every step of my journey) is in love with you.

More BEAN DOWN UNDER to come!
Posted by Michelle Lema on March 13, 2012