A Ghost Story (Get It Together)

Some days I don't get much done.  Some days I spend more time worrying and being afraid that I will never achieve my dreams, than I do taking actual steps to achieve my dreams.  I want to have a career as an actor and a writer.  So, I need to act more and write more.  I need to do so every day and not let that dream escape me for one second as I go about my life.  I tell myself this, but still some days I don't even make it out of the house.  I have days where I am really motivated and making great strides, and then I have days where I watch an entire season of Gossip Girl on my couch in my underpants.  I thought I would be doomed to repeat this pattern forever.  Then one day a ghost scared the shit out of me.

I was having trouble sleeping one night, thinking about how I need to act more and write more.  I was just drifting off to sleep when I heard a loud crashing noise downstairs.  I swiftly jumped out of my bed and landed like a cat on my floor, ready to quietly move downstairs and take down whoever had intruded upon my apartment.  And by "take down" I mean flail my arms around madly with my eyes closed, hoping I hit said intruder and knock them unconscious.

As soon as I got downstairs I Mission Impossible'd my way around every corner of my apartment.  There wasn't anyone there, but I noticed a book lying on the ground.  It was a book of quotes that had previously been snug in between my grandma's two Shakespeare volumes that I inherited after she passed away.  The book falling to the ground must have been the loud noise.

I looked more closely at the book, and it was perfectly open to this page: 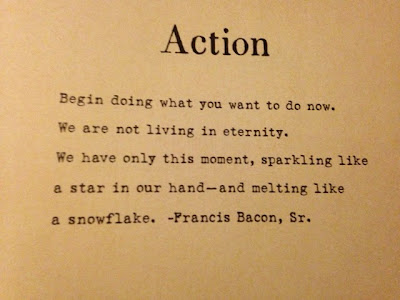 I looked back at my grandma's Shakespeare books.  They were standing straight up, with a space in between them where the book of quotes had been.  There was no way that book of quotes fell on its own because nothing around it fell.  It must have been a FREAKING ghost.

I was no longer afraid that someone had intruded into my apartment.  And I was very impressed by the well read ghost with excellent timing.  I put the book back on the shelf in case the ghost had any other messages for me that it wanted to throw down to the ground.

The next day, I wrote a similar note for myself to keep at my desk, as a slightly modernized version: 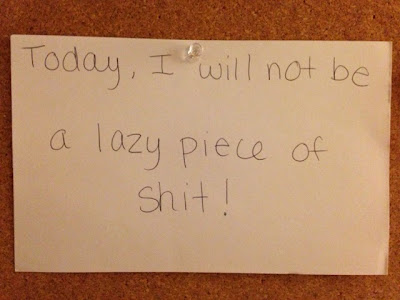 Thank you, ghost, for you may very well have saved me.
Posted by Michelle Lema on September 27, 2014